Have a favorite film or TV show role of Bo's? Drop Bo a line and let him know! 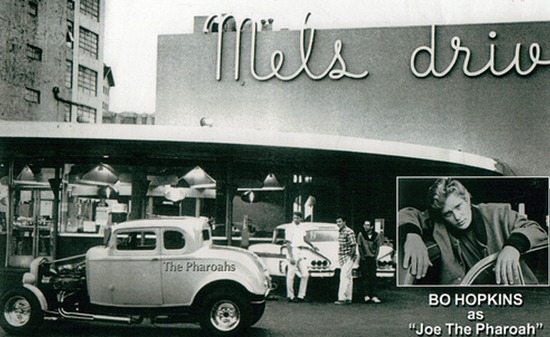 Bo’s acting background started at the infamous Desilu Playhouse under the guidance of Uta Hagen. His first major film acting role was in the western classic, The Wild Bunch with acclaimed director Sam Peckinpah playing opposite the likes of a few other Hollywood notables – Ernest Borgnine, William Holden and Edmond O’Brien. From there his career was on the fast track to stardom. He gave a memorable performance in the Universal Pictures film American Graffiti playing the role as the intimidating leader of the Pharaoh’s and he continues to amass notoriety for his clever portrayal still today.

With over one hundred acting credits to his name, Bo Hopkins continues to draw in the crowds when he finds time in his active schedule to make it to a select few car shows around the country. Always one to grant a photo op or sign an autograph for admirers of his work; he remains humble in his success.

Bo received his Star on the Western Walk of Stars April 23, 2017! Check out this great video of the star unveiling ceremony and the fantastic Q&A afterward here.